Platformer with a minimalist outline aesthetic. Switch between shapes with different abilities to solve each level and beat your best time and get the bonus collectables.

The game is controlled with a Keyboard and Mouse.

"Lock Icon made by Those Icons from www.flaticon.com"

Great job! Cool game! I had a blast playing it. Maybe i just feel the camera shake is way too "strong" in some places, also i had trouble playing it in a browser window (i was moving the cursor out of the window when charging) You could fix by moving camera in the way of cursor maybe.

I am missing some soundtrack, but sometimes no soundtrak is better than annoying soundtrack :)

You didn't have music playing? It must be a bug that I am unable to replicate on my browser. You can try and get the music by using the Windows Zip version or the Installer.

Thanks for playing the game. Am aware of the browser constraint issue on WebGL

Celeste-Boshy alike game. Simple, stylish and well made. You have some expirience. (btw, rate me?)

Personally I would add a little overlay that shows the name and number of the level you're playing if it's your first time playing the level. It would add quite a bit of extra personality.

An options screen to adjust volume of SFX and music would be nice too. I think a level select screen is a bit much to ask but would be great for replayabiity, especially if it showed player stats

I quite enjoy the screenshake when firing the ball and impacting surfaces. I think it feels quite satisfying especially when breaking the glass and hearing the glass-object impact noises. I like the way the breakable glass was introduced too and how it showed how it worked immediately

Nice! I like the glow effects, UI is pretty clean. Pretty cool that you've got target times for each level. Really liked how the star and circle shapes played. The shatter effect when you break through the blue walls was cool too.

You should apply a zero friction Physics2D material to your player so that you don't stick to the walls on the standard platformer shape. At least for me it got a bit irritating, particularly since there's an emphasis on finishing quickly.

Level 3 was pretty hard relative to the other levels, definitely took me the longest to do. I think the circle shape has the biggest learning curve since you have to aim way above your target, generally speaking. 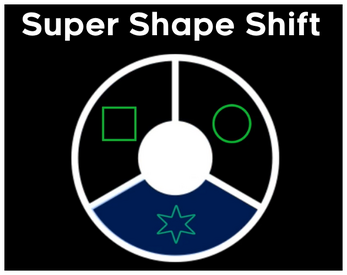